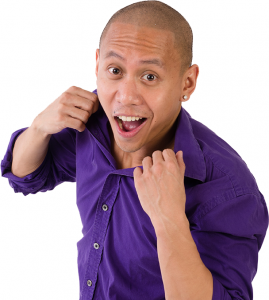 Mikey Bustos is a Canadian-born Filipino singer/song writer/performer, comedian, actor, video maker, and online personality. Also known as the “Ambassador of Filipinos on the Internet”, he is best known for his witty Filipino-themed and musical videos, both comedic and serious, on Youtube and Facebook.

He was also the 7th runner up finalist in Canadian Idol Season One in 2003. He earned a Canadian Gold Record, when the Canadian Idol Compilation CD released and sold over 60,000 units across Canada in 2003 under SONY/BMG Canada.

During his career, he has released three original music albums, several EPs, and singles, all of which are available on iTunes, Spotify, and other music retailers. He has also performed as front act to artist like Christina Aguilera in 2007 and the Pussycat Dolls in 2006.

He is currently based in Manila, Philippines where he works as a singer & performer, TV actor, event host, and videomaker. In 2015, he was awarded Best Youtube Channel in the Philippines at the WebTV Asia Awards in Kuala Lumpur, as well as Best Youtube Video in the Philippines, winning both nominations in his category. Later that year he also won Top Youtube Personality at the Influence Asia Awards in Singapore. He is currently an active Youtube Creator, running the Youtube Channel www.youtube.com/mikeybustosvideos

He has worked with international brands including Walt Disney Pictures, Netflix, Al Gore, Star Wars, Pepsi, and the NBA through viral video collaboration via Mikey’s Youtube and Facebook videos. He is currently the brand ambassador of Xoom by Paypal, Unilab, Standard Appliances and Hi Precision, as well as the face of the popular Mang Juan Chicharron/Shingaling/Korniks snacks for which Mikey appeared in a series of TV commercials.

His recent video hit “I Wear Speedos” Despacito Parody video went viral worldwide garnering over 36M views on Facebook, and was shared by popular sites like 9Gag. It is also being played on radio stations around the world, including the Elvis Duran Show in the US.

We're currently offline. Send us an email and we'll get back to you, asap.